The Youth Assembly at the United Nations was held two weeks ago & the UN Millennium Campaign had the privilege of being there to hold a data playground and speak to the youth. The Youth Assembly is a unique platform hosted by the Friendship Ambassadors created to foster dialogue and generate partnerships between exceptional youth, UN high officials and staff, private sector, and civil society. It was a great showcase of youth activists and gave the youth a platform in the UN to share their voices.

This opportunity to speak at the Youth Assembly was made possible by members Tami Kesselman & Margo LaZaro of the World We Want 2015’s Policy and Strategy Group. The PSG provides governance and strategic oversight for the World We Want 2015 platform, serving as an advisory board on key platform decisions affecting both long and short term vision and goals, and supports outreach and mobilization efforts specific to the platform.

The UN Millennium Campaign has the opportunity to speak to the youth about MY World & World We Want 2015 data focusing on transparency, participation, & inclusion of youth voices in the new global goals. They encouraged the youth to take part in these many opportunities to have their voice heard at the UN and motivated everyone to partake in the MyWorld survey. 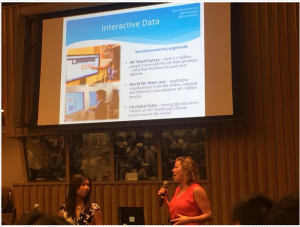 Humans of MY World photos were on display to visibly represent youth priorities and voices being heard around the world. Youth attendants were given their own chance to display their priorities on MY World cards that had an array of priorities to choose from. We heard from a variety of people on why they chose their different priorities.

“Women often don’t have a voice in developing countries & there’s a disparity between classes that also need to be considered when talking about women empowerment.” 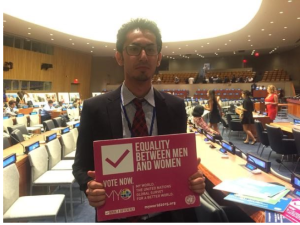 “My priority is gender equality because in Afghanistan, my country, the key to development is the empowerment of women.”

“Education is important to me because my grandmother sold her belongings to put me through school. I plan on being a lawyer and encouraging children to become lawyers to empower civil rights. All kids should be educated.”

Youth participants were given the opportunity to view the virtual reality films “Clouds over Sidra” & “Waves of Grace”. The emotional impact of these films was visible and it was overwhelmingly the most anticipated part of the assembly during the data playground.   Our data exhibit was a great success and brought together youth from all over the world to share their priorities and raise awareness of the Millennium Campaign projects and values. Youth voices are a valuable input to the data gathered for the UN post-2015 process and are especially important since it determines their future!

Any cookies that may not be particularly necessary for the website to function and is used specifically to collect user personal data via analytics, ads, other embedded contents are termed as non-necessary cookies. It is mandatory to procure user consent prior to running these cookies on your website.